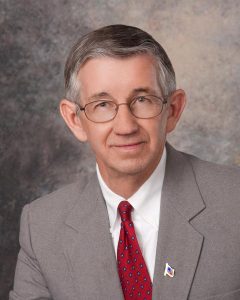 City of Carlsbad Mayor Dale Janway has served as Mayor of Carlsbad, New Mexico, since March 2010.  He has worked in the Safety, Health and Environmental field in the Potash and Oil and Gas Industry.Mayor Janway is proud to serve Carlsbad during a period of tremendous growth and prosperity.  During the past few years, this community has seen progress with the Halagueno Arts Park, the Carlsbad Veteran’s Memorial Park and, the Carlsbad Water Park, as well as many other developments. The Double Eagle Water Project will ensure that our citizens have water for years to come. Mayor Janway hosts an annual oil and gas summit and prayer breakfast every year, and both have been highly successful. These are just a few examples of what goes on in Carlsbad every year. Mayor Janway very proudly supports the many groups and organizations dedicated to this community. You won’t find anyone with a deeper love for Carlsbad. He previously served four terms on the Carlsbad City Council, and has been involved in many community and civic organizations; he has served on numerous boards of local organizations, including the Chamber of Commerce, Carlsbad Beautification, Community Health Advisory Panel, New Mexico Mine Safety Advisory Board and the Martin Luther King Scholarship Foundation, Carlsbad Community Foundation, Heritage Park and, many others. He is married to Cheryle, a retired nurse, and they have three children and eight grandchildren

Tragedies such as the shooting that happened in Uvalde this week are unfathomable to all of us.  Uvalde is a close-knit community very much like our own. Everyone in town knew someone who worked at or attended the elementary school where these terrible...
Read More

Thank you to Superintendent Gerry Washburn, Trey Gonsalez,  the Carlsbad High School Athletic Office, and everyone else who helped organize the “Parade of Champions” on Wednesday evening. A couple months ago, we celebrated the end of COVID-19 restrictions for...
Read More

Thank you to everyone who assisted with the dedication of the Law Enforcement Memorial in front of the Janell Whitlock Municipal Complex on Monday. There are currently five names on the memorial, ranging back in time to 1897: Sheriff James Leslie Dow, Sheriff...
Read More

The Eddy County Patriotic Association will be hosting a Memorial Day parade and ceremony on Monday, May 30. The parade lineup will begin at 8 a.m. at the Carlsbad Municipal Schools Administration Building (408 N. Canyon). The parade will head down Canyon toward...
Read More

Congratulations to Intrepid Potash. Intrepid’s East Mine has been chosen as the recipient of the Rocky Mountain Mining Institute’s 2022 Safety Award for Large Underground Mines. This award is based around production and meeting MSHA safety standards and is based on...
Read More
Carlsbad, New Mexico - Official City Website