You may have noticed some artistic improvements being made to some of the medians around Carlsbad recently. Carlsbad Mayor Dale Janway says the median improvement project is an effective way to enhance the appearance of the town. This project coincides with other important community beautification efforts, such as roadside cleanup and riverfront development.

The City recently completed a similar median improvement at the intersection of Church and Eighth Streets. In celebration of the intersection’s proximity to the high school, this intersection features a Cavemen and Cavegirl, as well as a large “C” pyramid.

The median at Eighth and Pierce Street is getting a similar facelift.  Work is still in progress as of February of 2020, and artwork at that median will also include a Caveman and Cavegirl, the Caverns and a rendering of the Flume.

The first phase of the median improvement project near the Bataan Bridge has also been completed. The City’s refurbishment effort will also include the addition of artwork depicting quail, lizards and roadrunners on the median and its rainwater catch basins.

What’s next? Mayor Janway said the City will keep working through town on adding median improvements near major intersections. Keep an eye out for some new artwork coming to a median near you! 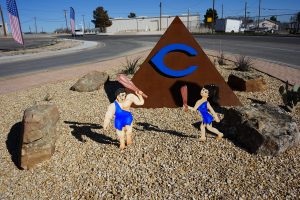 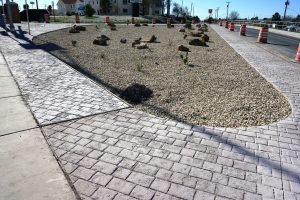